We are seeing more 3-D Cell Based Assays being used for Neuroscience Research. It is important researchers have the Neuron-Astroglial-Progenitor Markers required for staining in 3-D. This helps researchers determine the cell types present in their assays.


3D movie reconstructed by super-resolution structured illumination microscopy (SIM) imaging of live organotypic mouse cerebellar slices stained with MS#30 (red), then fixed and stained for MAG (blue) and NF-H (purple). MS#30 reactivity was on oligodendrocyte processes, including those contacting adjacent axons, and on myelinated MAG+ axons, outside of MAG layer. Scale bar: 2 μm. (MPG 90340 kb).
We will continue to post cool applications for our antibodies here.
Posted by Neuromics at 10:51 AM No comments: 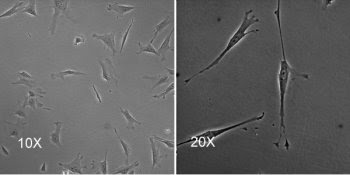 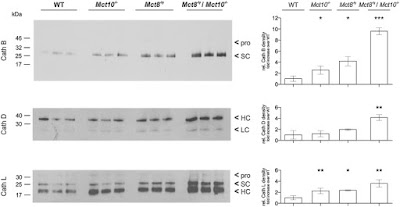 Images: Protein levels of cathepsin B, D, and L in thyroids of TH transporter-deficient adult mice. Whole thyroid lysates of adult mice (5–8 months old) were separated on horizontal SDS-gels, transferred to nitrocellulose and incubated with antibodies against cathepsins B, D or L (left panels). Densitometry of the indicated bands revealed that cathepsin D protein levels were elevated significantly in Mct8/Mct10-deficient mice, whereas cathepsin B and L levels were increased in all investigated genotypes when compared to WT (right panels). 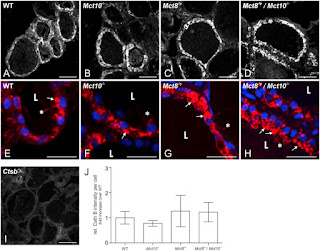 Images: Expression and localization of cathepsin B in thyroid glands from TH transporter-deficient mice. Cathepsin B (white, red) was mainly localised in vesicles of thyrocytes of WT (A) and Mct10- (B) Mct8- (C), and Mct8/Mct10-deficient (D) animals but also associated with the apical plasma membrane domain and within the lumen of thyroid follicles (E to H, asterisks). Thyroid tissue taken from cathepsin B-deficient animals served as controls for antibody specificity, which was confirmed by lack of primary antibody reactivity (I). Vesicular staining (arrows) of cathepsin B is more pronounced and signal intensities (J) are slightly increased in both, Mct8- (G) or Mct8/Mct10-deficient (H) mouse thyroids when compared to WT (E). Representative images of 3 animals (5–8 months old) per genotype are displayed.

We will continue to post relevant stories of our markers in action.
Posted by Neuromics at 7:24 AM 1 comment:

We Use It for our Primary, Human Cell Culture Media 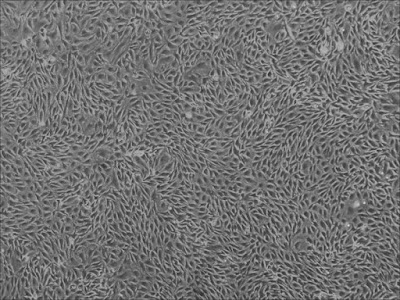 HRMECs were initiated by elutriation from dissociated normal human retinal tissue. Passage 3 cells are ship in proliferating culture with a confluency of greater than 90 %. ENDO-Growth medium containing 5% serum and growth supplements are recommended for culture. Cells have an average additional population doubling levels >16 when cultured.
Posted by Neuromics at 12:30 PM No comments:

Build Yourself a Stock. We now have adult primary neurons that can be passaged up to 5 times! You can now build a stock of 20-30 million cells. 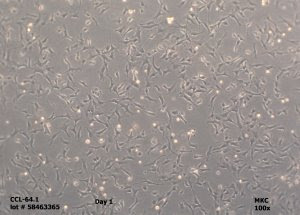 Human primary neurons are isolated from brain cortical tissue. We highly recommend culturing in our human neuron growth media (cat#HNM001).
Check out our many Primary Neuron and Astrocyte options. 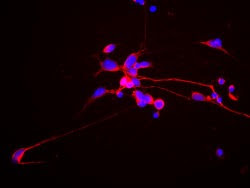 ECS Derived hN2 Human Primary Neurons grown in culture for 4 days and stained with our chicken polyclonal to Neurofilament light or low molecular weight chain NF-L, a marker of neurons. Many of the differentiating cells show strong cytoplasmic and clearly fibrillar staining for NF-L. Blue stain is DAPI and reveals cell nuclei of some nonneuronal cells in these cultures.
Check out related Markers!

Posted by Neuromics at 3:00 PM No comments:

Our Synaptic Marker is Used to Compare Earth vs Space Samples
Exposure to the microgravity conditions of spaceflight alleviates the load normally imposed by the Earth’s gravitational field upon the inner ear utricular epithelia. Previous ultrastructural investigations showed that spaceflight induced an increase in synapse density within hair cells of the rat utricle. However, the utricle exhibits broad physiologic heterogeneity across different epithelial regions, and it is unknown whether capabilities for synaptic plasticity generalize to hair cells across its topography. To achieve systematic and broader sampling of the epithelium than previously conducted we used immunohistochemistry and volumetric image analyses to quantify synapse distributions across representative utricular regions in specimens from mice exposed to spaceflight (a 15-day mission of the space shuttle Discovery). These measures were compared to similarly-sampled Earth-bound controls. Following paraformaldehyde fixation and microdissection, immunohistochemistry was performed on intact specimens to label presynaptic ribbons (anti-CtBP2) and postsynaptic receptor complexes (anti-Shank1A) DOI: 10.1152/jn.00240.2016. 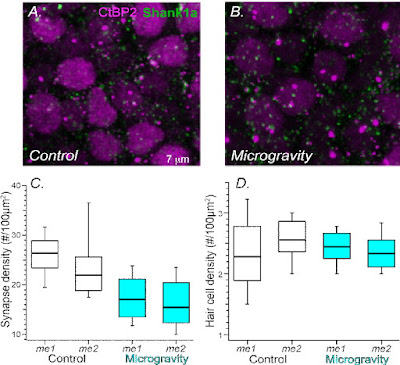 Mature vestibular hair cells retain capabilities for structural plasticity manifested through modulation of synapse density. Investigations are ongoing that are testing the hypothesis that synapse density increases may result from exposure to centrifugation-induced hypergravity, which would provide the foundation for future research into the molecular mechanisms through which these modifications are induced. This research will provide insight and strategies for inner ear rehabilitation through the induction of synapse density increases in conditions of vestibular paresis.

Maybe zero gravity will play a role in therapies for hearing loss?
Posted by Neuromics at 10:47 AM No comments: