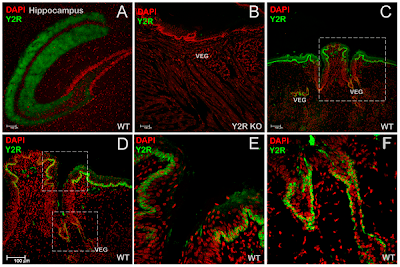 These findings could prove a first step in identifying new targets for obesity fighting therapies. Increasing PYY salivary output would provide satiety with less food intake. This would give a whole new perspective on dieting. If we are satsified with less food intake is this really dieting? Stay tuned.
Posted by Neuromics at 10:50 AM 1 comment: Links to this post

Opioid Addiction During Pregnancy-Implications for Neuro-development

Highlights: Oligodendrocytes are responsible for making myelin in the CNS. The authors have shown We have shown previously that rat brain myelination is significantly altered by buprenorphine, an opioid analogue currently used in clinical trials for managing pregnant opioid addicts. In this study, perinatal exposure to low levels of this drug induced accelerated and increased expression of myelin basic proteins (MBPs), cellular and myelin components that are markers of mature oligodendrocytes. In contrast, supra-therapeutic drug doses delayed MBP brain expression and resulted in a decreased number of myelinated axons. We have now found that this biphasic-dose response to buprenorphine can be attributed to the participation of both the l-opioid receptor (MOR) and the nociceptin/orphanin FQ receptor (NOP receptor) in the oligodendrocytes. This is the first study showing the potential role of the NOP receptor in myelination. 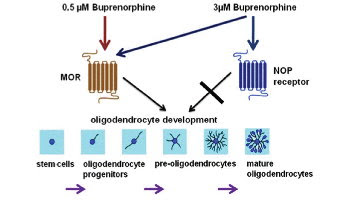 High levels of opiate exposure could negatively disrupt the normal interplay between these two systems altering the developmental pattern of brain myelination. Understanding this pathway, could help researchers find ways to favorably modulate myelination and protect neuro-development of fetuses exposed to high levels of opiates during pregnancy. 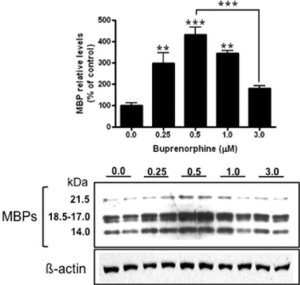 Direct treatment of immature oligodendrocytes with buprenorphine alters MBP expression in a dose-specific manner. Cells isolated from 9-day-old rat brains were incubated for 4 days in CDM with or without 0.25, 0.5, 1.0, and 3.0 lM buprenorphine. MBP levels were determined by western blotting using b-actin levels as loading controls. Figures correspond to representative experiments. Results in the bar graph are expressed as percentage of controls (0 lM buprenorphine) 6 SEM from five experiments and correspond to the combined scanning of the four major MBP isoforms. **P <0.005 and ***P<0.0001. 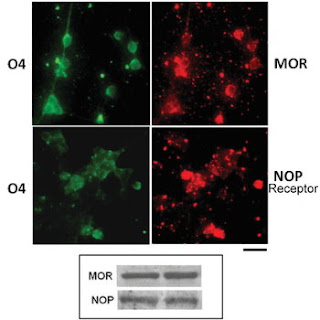 I will be posting future studies investigating the molecular mechanisms by which buprenorphine and methadone affect myelination and neuron-glial interactions. These should provide deeper understanding into these developmental processes and new and better strategies for the managing of both pregnant addicts and drug addiction in adolescence.
Posted by Neuromics at 7:18 AM 3 comments: Links to this post