Posted by Neuromics at 2:22 PM 2 comments: Links to this post

I would like to thank Montina Van Meter, Lab Manager, Autonomic Neuroscience at Pennington Biomedical Research Center, for alerting me to this just published study. Included are excellent images of stained LepRb (OB-Rb) and GAD1 expressing neurons localized in loose clusters of cells in the DMN, NST, and the VLM.

This study focus on identifying loci in the hindbrain where leptin and TRH act synergistically to increase thermogenesis. Since thermogenic processes are at the root of how our bodies regulate energy, understanding the related expression and signaling pathways could be key to finding therapies for obesity. 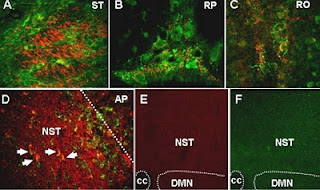 Example images: Distribution of LepRb+ fibers in hindbrain. LepRb-ir (red) fibers and varicosities are seen among TRHR1-ir (green) cells and fibers. These red and green fibers are adjacent and co-mingle but do not show co-localization of receptors. This pattern is seen in (A) fascicles of the solitary tract (ST); (B) raphe pallidus (RP), and (C) raphe obscurrus (RO). (D) Border between the medial solitary nucleus (NST) and the area postrema (AP; white dashed line) showing an abundance of LepRb-ir (red) fibers and
neurons (white arrows for selected neurons) in the NST but not the AP. (E) LepRb-ir staining is suppressed by pretreatment of tissue with LepRb epitope blocking peptide. (F) TRHR1-ir staining is suppressed by treatment with excess TRHR1. Scale bar A–D=100 microns; E, F=300 microns. cc=central canal.
Abstract: We have reported a highly cooperative interaction between leptin and thyrotropin releasing hormone (TRH) in the hindbrain to generate thermogenic responses (Hermann et al., 2006) (Rogers et al., 2009). Identifying the locus in the hindbrain where leptin and TRH act synergistically to increase thermogenesis will be necessary before we can determine the mechanism(s) by which this interaction occurs. Here, we performed heat-induced epitope recovery techniques and in situ hybridization to determine if neurons or afferent fibers in the hindbrain possess both TRH type 1 receptor and long-form leptin receptor [TRHR1; LepRb, respectively]. LepRb receptors were highly expressed in the solitary nucleus [NST], dorsal motor nucleus of the vagus [DMN] and catecholaminergic neurons of the ventrolateral medulla [VLM]. All neurons that contained LepRb also contained TRHR1. Fibers in the NST and the raphe pallidus [RP] and obscurrus [RO] that possess LepRb receptors were phenotypically identified as glutamatergic type 2 fibers (vglut2). Fibers in the NST and RP that possess TRHR1 receptors were phenotypically identified as serotonergic [i.e., immunopositive for the serotonin transporter; SERT]. Co-localization of LepRb and TRHR1 was not observed on individual fibers in the hindbrain but these two fiber types co-mingle in these nuclei. These anatomical arrangements may provide a basis for the synergy between leptin and TRH to increase thermogenesis.

I am pleased to present this excellent video. It also has excellent images using key stem cell markers as the cells undergo differentiation:

Cancer pain is difficult to treat as it appears to be driven simultaneously by inflammatory, neuropathic and tumorigenic mechanisms. I have reported on multiple occasions publication referencing use of our Pain and Inflammation Research Antibodies in studying bone cancer pain.

I would like to alert you to the latest reference:

Summary: Pain remains an area of considerable unmet clinical need, and this is particularly true of pain associated with bone metastases, in part because existing analgesic drugs show only limited efficacy in many patients and in part because of the adverse side effects associated with these agents. An important issue is that the nature and roles of the algogens produced in bone that drive pain-signalling systems remain unknown. Here, we tested the hypothesis that adenosine triphosphate is one such key mediator through actions on P2X3 and P2X2/3 receptors, which are expressed selectively on primary afferent nocioceptors, including those innervating the bone. Using a well-established rat model of bone cancer pain, AF-353, a recently described potent and selective P2X3 and P2X2/3 receptor antagonist, was administered orally to rats and found to produce highly significant prevention and reversal of bone cancer pain behaviour. This attenuation occurred without apparent modification of the disease, since bone destruction induced by rat MRMT-1 carcinoma cells was not significantly altered by AF-353. Using in vivo electrophysiology, evidence for a central site of action was provided by dose-dependent reductions in electrical, mechanical and thermal stimuli-evoked dorsal horn neuronal hyperexcitability following direct AF-353 administration onto the spinal cord of bone cancer animals. A peripheral site of action was also suggested by studies on the extracellular release of adenosine triphosphate from MRMT-1 carcinoma cells. Moreover, elevated phosphorylated-extracellular signal-regulated kinase expression in dorsal root ganglion neurons, induced by co-cultured MRMT-1 carcinoma cells, was significantly reduced in the presence of AF-353. These data suggest that blockade of P2X3 and P2X2/3 receptors on both the peripheral and central terminals of nocioceptors contributes to analgesic efficacy in a model of bone cancer pain. Thus, systemic P2X3 and P2X2/3 receptor antagonists with central nervous system penetration may offer a promising therapeutic tool in treating bone cancer pain.

All Purinergic Receptors
Neurotransmission Research Antibodies
Posted by Neuromics at 3:14 PM No comments: Links to this post