Our partner, RayBiotech, provides us Antibody Arrays and ELISA Kits. This should give potential customers confirmation that this kit are rock solid.

NORCROSS, GA -- (Marketwired) -- 09/11/13 -- RayBiotech, Inc. announced today that the company has been awarded ISO 13485: 2003 certification with respect to its compliance in the manufacture of in vitro diagnostics kits to be provided to the research community. The ISO 13485 award applies to multivariant antibody arrays, enzyme-linked immunosorbent assays (ELISAs) as well as membrane and glass format arrays and reagents. ISO 13485 is the International Organization for Standardization's certification that the fundamentals of quality management are in place and actively implemented as formal systems within the organization. The ISO 13485 compliance certification is in addition to the company's formal compliance under Good Laboratory Practices (GLP) and Good Manufacturing Practices (GMP), and it further confirms RayBiotech's commitment to quality control and quality assurance for all of its products and services. 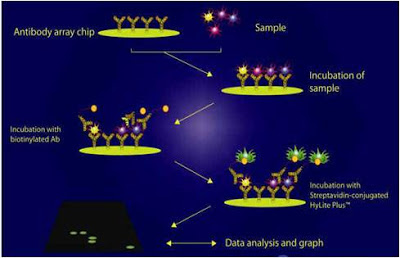 We will be posting customers feedback on Bazaarify as they becomes available.

Posted by Neuromics at 7:36 PM No comments: 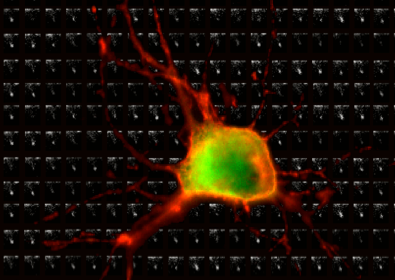 This work is being done by Dr. Ricardo Dolmetsch and his team at Stanford. They are particularly interested in understanding how electrical activity and calcium signals control the development of the brain and how this is altered in children with autism spectrum disorders.

I plan on posting more here as part of my featuring the work of key Autism Researchers like Dr. Valerie Hu at GWU. She will also be featured on my "News Behind the Neuroscience News" Blog at www.neuromics.net.
Posted by Neuromics at 11:35 AM No comments:

Image: Neuromics' P2X3 R WB Example: Sequence‐specific siRNA‐mediated repression of P2X3. (A) P2X3 mRNA inhibition by 200 nM siRNA duplexes. Twenty‐four hours after transfection of CHO‐rP2X3 cells, P2X3‐specific mRNA was measured with Q‐PCR and plotted as percentage of mRNA detected in the control treated with Oligofectamine alone. Sequences and modifications are shown in Figure 1B and Table 1. (B) P2X3 protein reduction by 200 nM siRNA‐8646/8647, but not by its mismatch analogue siRNA‐MM‐7558/7559 or the unrelated siRNA‐7126/7127. Twenty‐four hours after transfection, protein was extracted and analysed by western blotting. P2X3‐specific immunodetection reveals expression levels as shown below (an average value from two experiments). Time points as indicated at the top. Molecular weights of two glycosylated forms of P2X3 are shown on the left.

Conclusions: Nociceptive response intensity was measured by observing the rat's behavior and considering the number of times the animal reflexively raised its hind paw (flinches) in 60 min. Local subcutaneous administration of the selective TRPA1, 5-HT3 or 5-HT1A receptor antagonists HC 030031, tropisetron and WAY 100,135, respectively, prevented the nociceptive responses induced by the administration in the same site of the non-selective P2X3 receptor agonist αβmeATP. Administration of the selective P2X3 and P2X2/3 receptor antagonist A-317491 or pretreatment with oligonucleotides antisense against P2X3 receptor prevented the formalin-induced behavioral nociceptive responses during the first and second phases. Also, the co-administration of a subthreshold dose of αβmeATP with a subthreshold dose of formalin induced nociceptive behavior, which was prevented by local administration of tropisetron, HC 030031 or WAY 100, 135. These findings have demonstrated that the activation of P2X3 receptors induces inflammatory nociception modulated by TRPA1, 5-HT3 and 5-HT1A receptors. Also, they suggest that inflammatory nociception is modulated by the release of endogenous ATP and P2X3 receptor activation, which in turn, increases primary afferent nociceptor susceptibility to the action of inflammatory mediators via interaction with TRPA1, 5-HT3 and 5-HT1A receptors in the peripheral tissue.

I will continue to post pain and inflammation related studies that reference the use of our antibodies.
Posted by Neuromics at 12:00 PM 2 comments: