I am pleased to update you in recent publications and videos referencing use of our reagents for pain research. Check them out.
Andrew C. Eschenroeder, Allison A. Vestal-Laborde, Emilse S. Sanchez, Susan E. Robinson, Carmen Sato-Bigbee. Oligodendrocyte responses to buprenorphine uncover novel and opposing roles of μ-opioid- and nociceptin/orphanin FQ receptors in cell development: Implications for drug addiction treatment during pregnancy. Glia Volume 60, Issue 1, pages 125–136, January 2012....The MOR and NOP receptor antibodies were from Neuromics (Edina, MN) and used for immunocytochemistry (1:100)and western blotting (1:500)...

I will continue to post updates related to this important research area.
Posted by Neuromics at 5:00 PM No comments: Links to this post

Highlights: Leptin, a polypeptide hormone produced mainly by adipocytes, has diverse effects in both the brain and peripheral organs, including suppression of feeding. Other than mediating leptin transport across the blood-brain barrier, the role of the endothelial leptin receptor remains unclear. We recently generated a mutant mouse strain lacking endothelial leptin receptor signaling, and showed that there is an increased uptake of leptin by brain parenchyma after its delivery by in-situ brain perfusion. Here, we tested the hypothesis that endothelial leptin receptor mutation confers partial resistance to diet-induced obesity. These ELKO mice had similar body weight and percent fat as their wildtype littermates when fed with rodent chow, but blood concentrations of leptin were significantly elevated. In response to a high fat diet, wildtype mice had a greater gain of body weight and fat than ELKO mice . As shown by metabolic chamber measurement, the ELKO mice had higher oxygen consumption, carbon dioxide production, and heat dissipation, although food intake was similar to that of the wildtype mice and locomotor activity was even reduced. This indicates that the partial resistance to diet-induced obesity was mediated by higher metabolic activity in the ELKO mice. Since neuronal leptin receptor knockout mice show obesity and diabetes, the results suggest that endothelial leptin signaling shows opposite effects from that of neuronal leptin signaling, with a facilitatory role in diet-induced obesity.


Obesity is a growing health problem and will continue to drive up costs. Research like this could help find effective and log term solutions for helping with weight loss.
Posted by Neuromics at 4:08 PM No comments: Links to this post

Our P2X3 Receptor Antibodies are widely used and frequently published. This publication references use of our P2X3 Guinea Pig Antibody.

I like the "cool factor" in this study: Ji Z-G , Ito S , Honjoh T , Ohta H , Ishizuka T , et al. 2012 Light-evoked Somatosensory Perception of Transgenic Rats That Express Channelrhodopsin-2 in Dorsal Root Ganglion Cells. PLoS ONE 7(3): e32699. doi:10.1371/journal.pone.0032699.-"We have recently generated several transgenic lines of rat in which channelrhodopsin-2 (ChR2) transgene is driven by the Thy-1.2 promoter. In one of them, W-TChR2V4, some neurons were endowed with photosensitivity by the introduction of the ChR2 gene, coding an algal photoreceptor molecule. The DRG neurons expressing ChR2 were immunohistochemically identified using specific antibodies to the markers of mechanoreceptive or nociceptive neurons. Their peripheral nerve endings in the plantar skin as well as the central endings in the spinal cord were also examined. We identified that ChR2 is expressed in a certain population of large neurons in the DRG of W-TChR2V4. On the basis of their morphology and molecular markers, these neurons were classified as mechanoreceptive but not nociceptive. ChR2 was also distributed in their peripheral sensory nerve endings, some of which were closely associated with CK20-positive cells to form Merkel cell-neurite complexes or with S-100-positive cells to form structures like Meissner's corpuscles. These nerve endings are thus suggested to be involved in the sensing of touch. Each W-TChR2V4 rat showed a sensory-evoked behavior in response to blue LED flashes on the plantar skin. It is thus suggested that each rat acquired an unusual sensory modality of sensing blue light through the skin as touch-pressure. This light-evoked somatosensory perception should facilitate study of how the complex tactile sense emerges in the brain." 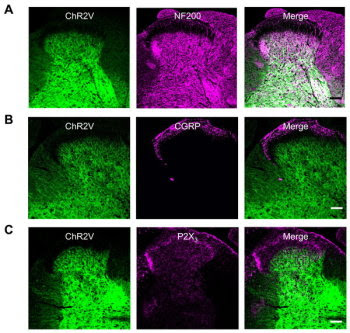 Images. Distribution of ChR2V in the dorsal part of the spinal cord. A–C. Immunohistochemical localizationof ChR2V with the cell-type specific markers, NF200 (A), CGRP (B) or P2X3 (C). Scale bars indicate 40 µm.

Note that the receptors involved in Nociceptive Pain Sensing do not overlap with ChR2V. From this the authors conclude that ChR2V is involved in mechanoreception. This rat model should facilitate future study of how complex tactile perception, such as for texture, size and shape, is generated. We will keep you posted.

In the meantime check out our markers and antibodies for studying Neurotransmission and Synaptic Mechanisms.
Posted by Neuromics at 7:57 AM No comments: Links to this post