We are working with customers and collaborators to strengthen our product offerings for Immune Response Researchers.

An interesting finding on Receptor for Advanced Glycation End Products (RAGE) and response to S. pneumoniae pneumonia infection just crossed our radar. Dr. Marieke A. D. van Zoelen and team published evidence that RAGE plays a detrimental role in the host response to S. pneumoniae pneumonia by facilitating the bacterial growth and dissemination and concurrently enhancing the pulmonary inflammatory and procoagulant response. Data include use of our RAGE-Cat#: GT15030.

Here's the publication and related data: 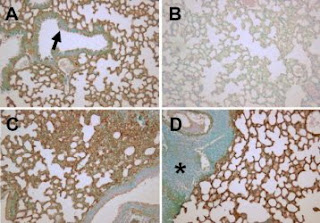 Images: Expression of RAGE in lungs during S. pneumoniae pneumonia. Representative view of a lung from a normal, uninfected Wt mouse (A) displaying ubiquitous expression of RAGE on the surface of endothelium. B, Absence of RAGE positivity in the lung of a RAGE–/– mouse. C and D, Lungs from a Wt mouse 48 h after the inoculation of S. pneumoniae. Arrow indicates bronchial epithelium in healthy lungs (A); asterisk indicates neutrophils in an area with confluent pneumonia (D), both being negative for RAGE staining. RAGE staining: original magnification x10.

Immune Response Proteins
Posted by Neuromics at 12:51 PM No comments: