The feedback from customers on our Tuj 1 (Neuron-specific class III beta-tubulin) is that it works!

This is confirmed by the growing list of references in key publications. Here's the latest:

We would like to Dr. Andrew Todd for sharing this excellent IHC image using our Guinea Pig ProDynorphin (rat) antibody. 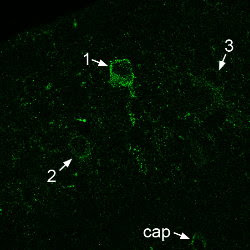 The tissue is perfusion-fixed (4% freshly prepared formaldehyde) adult rat spinal cord, reacted overnight with the PPD at 1:1000 and then o/n in Alexa488 secondary (raised in donkey, Invitrogen, 1:500).

The confocal image stack was taken through a 60x oil lens (Bio-Rad Radiance confocal) - pixel size is 0.196 micrometre and this is a projection of 10 confocal optical sections at 0.5 micrometre z-spacing.
Customer Publications
Related Reagents:
proDynorphin (guinea pig)
Opioid Receptors
Pain and Inflammation Antibodies
Posted by Neuromics at 12:26 PM No comments:

Here's an update on recent developments. First, we wanted to share a recent publication referencing 2 of our Neurotransmission Research Antibodies:

Second, we continue to bulk up on reagents for Neurotransmission, Neuromodulation and Synaptic Plasticity Research Reagents. Check out these product categories:

Posted by Neuromics at 3:01 PM No comments:

We would like to thank Dr. Fletcher White, LUMC, for Sharing this data with us: 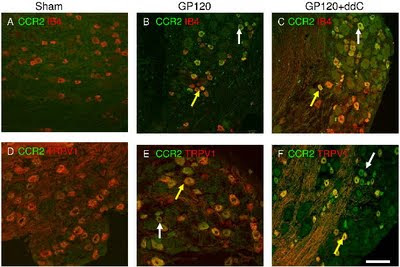 Images: The CCR2 chemokine receptor colocalized with IB4 and TRPV1, markers of nociceptive neurons, after injury. A) Many lumbar DRG neurons in vehicle-treated rat sensory neurons were positive for IB4, a neuronal phenotype that distinguishes some C-fiber nociceptors (red cells), however there was no expression of the CCR2 protein. B) After perineural gp120/hCD4 treatment, CCR2 protein expression (green cells) was upregulated, and co-localized with IB4. C) Both gp120/hCD4 and ddC treatment resulted in an upregulation of CCR2 expression (green cells) in many small and medium diameter neurons. Again, CCR2 co-localized in a number of IB4 positive cells. D) The TRPV1 channel is present on many nociceptive neurons and is involved in the neuropathic pain mechanism. Under normal conditions, TRPV1 was expressed in neurons (red cells). E) After gp120/hCD4 treatment, CCR2 expression is upregulated (green cells) and colocalized with TRPV1. F) After the combination of gp120/hCD4 and ddC treatments, again CCR2 was upregulated to a similar degree as gp120/hCD4 treatment alone and exhibited some colocalizations with TRPV1.
Scale Bar: 100um.