The roots of Neuromics is providing solutions for the study of nociceptive and neuropathic pain. Our tools are widely used and frequently published. We are pleased to bring you these small molecules designed to help you better understand the roots of pain and potential therapies.

Questions? Do not hesitate to contact me @ pshuster@neuromics.com or 612-801-1007. Thank you! Pete Shuster, CEO and Owner, Neuromics.
Posted by Neuromics at 11:18 AM No comments: Links to this post

Take Your Neuromics' Brain on an Adventure


Have fun. We can't wait to see your ideas.
#brainadventure
Posted by Neuromics at 4:19 PM No comments: Links to this post

Have Brain; Will Travel

Join the Adventure and You Could Win 500 USD

Join Neuromics on our‪#‎BrainAdventure‬ to see all the interesting and unique locations the brain ventures. Starting this September, with all orders, you will receive a Neuromics brain keychain. Take a creative picture or short video of the Neuromics Brain Keychain and tweet it @Neuromics, post it on Neuromics Facebook or LinkedIn Page and be entered in our contest. In the meantime, if you want to join the contest, e-mail rose@neuromics.com and she will mail you your brain.

Posted by Neuromics at 9:12 AM No comments: Links to this post

What we are learning.

Here researchers study the impact of Marijuana on memory impairment using our one of our 5-HT Serotonin Antibodies: Xavier Viñals, Estefanía Moreno, Laurence Lanfumey, Arnau Cordomí, Antoni Pastor, Rafael de La Torre, Paola Gasperini, Gemma Navarro, Lesley A. Howell, Leonardo Pardo, Carmen Lluís, Enric I. Canela, Peter J. McCormick, Rafael Maldonado, Patricia Robledo. Cognitive Impairment Induced by Delta9-tetrahydrocannabinol Occurs through Heteromers between Cannabinoid CB1 and Serotonin 5-HT2A Receptors. Published: July 9, 2015DOI: 10.1371/journal.pbio.1002194.
Impact on Memory: Activation of cannabinoid CB1 receptors (CB1R) by delta9-tetrahydrocannabinol (THC) produces a variety of negative effects with major consequences in cannabis users that constitute important drawbacks for the use of cannabinoids as therapeutic agents. For this reason, there is a tremendous medical interest in harnessing the beneficial effects of THC. Behavioral studies carried out in mice lacking 5-HT2A receptors (5-HT2AR) revealed a remarkable 5-HT2AR-dependent dissociation in the beneficial antinociceptive effects of THC and its detrimental amnesic properties We found that specific effects of THC such as memory deficits, anxiolytic-like effects, and social interaction are under the control of 5-HT2AR, but its acute hypolocomotor, hypothermic, anxiogenic, and antinociceptive effects are not. In biochemical studies, we show that CB1R and 5-HT2AR form heteromers that are expressed and functionally active in specific brain regions involved in memory impairment. Remarkably, our functional data shows that costimulation of both receptors by agonists reduces cell signaling, antagonist binding to one receptor blocks signaling of the interacting receptor, and heteromer formation leads to a switch in G-protein coupling for 5-HT2AR from Gq to Gi proteins. Synthetic peptides with the sequence of transmembrane helices 5 and 6 of CB1R, fused to a cell-penetrating peptide, were able to disrupt receptor heteromerization in vivo, leading to a selective abrogation of memory impairments caused by exposure to THC. These data reveal a novel molecular mechanism for the functional interaction between CB1R and 5-HT2AR mediating cognitive impairment. CB1R-5-HT2AR heteromers are thus good targets to dissociate the cognitive deficits induced by THC from its beneficial antinociceptive properties. 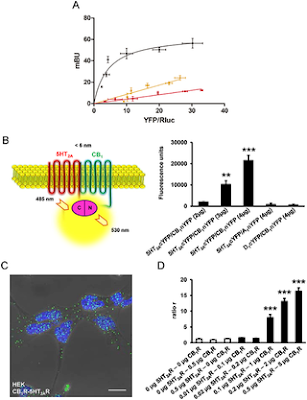 Yes, memory impairment must be considered as a side effect of Medical Marijuana, I am confident there are human subjects that would volunteer for cognition studies to get a clearer picture of the short and long term impact on users.
Posted by Neuromics at 2:35 PM No comments: Links to this post

I am pleased by the growing positive response to our Human Endothelial Cells offerings. Our Human Brain Microvascular Endothelial Cells have, far and away, been the most popular. We want to make it easier for you to "buy and try" We are offering them for only 699 USD/500,000 Cells through Aug. 31st, 2015. Note: customers have passaged these cells up to 15 X. 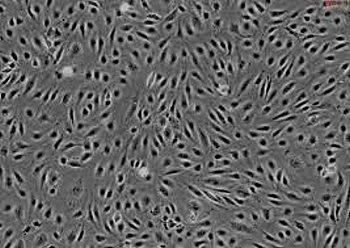 Posted by Neuromics at 6:50 AM No comments: Links to this post

Gene Expression-Have it Your Way

From Delivery to Stable Expression
Neuromics has a successful track record of helping our clients delivery siRNA, miRNA, Plasmids and other oligos in vitro and in vivo with our Transfection Kits...But my vision with our cell based assay solutions has always been to provide engineered cells and plasmids modified to study your genes of interest. I am pleased to announce we are working with Smart Cell /B-MoGen Technologies to make this happen. We now can provide:
Gene Transfer and Expression Products Leveraging the Sleeping Beauty Technology: 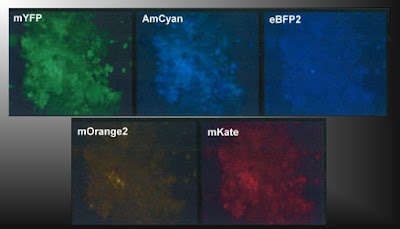 Images: B-MoGen Transposon exhibiting stable expression of five fluorescent genes.
Advantages of Sleeping Beauty Transposon System:
· Delivery method is time and cost effective compared to lentiviral delivery.
· Increased cargo-capacity when compared to lentiviral delivery.
· Safest insertion profile of all gene transfer methods.
· Commonly integrated as a single copy.
Custom vector design and assembly, including multi-gene (up to 6) vectors.
We are in the process of formulating standard offerings. In the meantime, I am positioned to offer favorable pricing and terms to early adopters of our Sleeping Beauty Solutions. Please contact me directly pshuster@neuromics.com or 612-801-1007. We can together determine your needs and desired outcomes and provide a statement of work with pricing, project milestones and delivery.
Posted by Neuromics at 1:57 PM No comments: Links to this post