Dr. Paul Tesar and his team at Case Western University demonstrated the ability to convert pluripotent epiblast stem cells into pure populations of myelinating cells, called oligodendrocyte progenitor cells (OPCs). First, stem cells in a petri dish are treated with molecules to direct them to become the most primitive cells in the nervous system. To produce OPCs, these primitive cells are treated with a defined set of proteins. The cells were cultured on laminin and treated withh apporopriate growth factors. The OPCs were nearly homogenous and could be multiplied to obtain more than a trillion cells.

These methods could used to potentially produce stable and pure populations of human OPCs in a significant enough number to treat patients with demyelinating diseases such as multiple sclerosis and cerebral palsy.
Posted by Neuromics at 10:38 AM No comments:

I would like to thank Dr. Gerry Shaw, University of Florida for his excellent work with our Primary Neurons and Astrocytes and Neuronal-Glial Markers. Here's an example image with many more to follow: 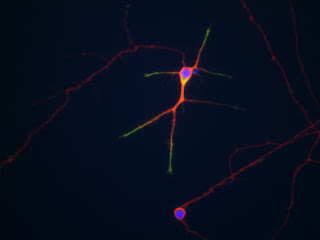 Image: E18 hippocampal neurons stained with MAPT (red) and Doublecortin (green). The two proteins overlap in the proximal dendrites, but doublecortin is more abundant in the growth cones and periphery. As a result, the periphery appears green while the more proximal regions of the cells are yellow. The single longer process of this cell, presumably an axon, has a low doublecortin content and so appears red. Blue staining is the nuclear DNA. Protocol on datasheet.
Posted by Neuromics at 4:25 AM 1 comment:

Get fit and get smart. There is increasing evidence that vigorous exercise increases secretion of Brain-Derived Neurotrophic Factor (BDNF) Protein.  BDNF is a catalyst of processes that increase growth of neurons especially in the hippocampus.

Posted by Neuromics at 6:01 PM No comments: