TRPV1 with a Twist

Kudos to Dr. Marna Erickson and her team at the University of Minnesota. They recently published excellent work demonstrating a relationship between TRPV1 -EGFR signaling and skin cancer.

"TRPV1 interacts with EGFR, leading to EGFR degradation. Notably, the absence of TRPV1 in mice results in a striking increase in skin carcinogenesis. The TRPV1 is the first membrane receptor shown to have a tumor-suppressing effect associated with the down-regulation of another membrane receptor."

Posted by Neuromics at 3:11 PM No comments:

Dr. Y.K. Prakash and his team at Mayo Clinic College of Medicine have published a study of Neurotrophin Signaling in Airway Smooth Muscle (ASM) cells. Here they demonstrate that BDNF/TrkB signaling (but not BDNF/p75NTR) in human ASM cells regulates [Ca2+]i responses to agonist in both normal ASM, as well as with inflammation induced by TNFα. These effects suggest an important role of NT signaling in inflammation-induced changes in ASM contractility.

The feedback has been positive. Related to this, here's a recent reference: 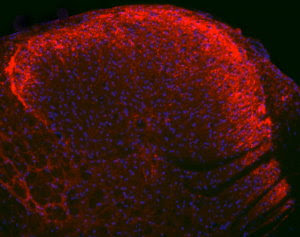 Posted by Neuromics at 6:22 AM No comments: