Our Otx2 Antibody is a potent marker for Human, Mouse and Rat Midbrain Dopamanergic Progenitors.

This is confirmed by a recent publication by Dr. Ole Isaacson et al: 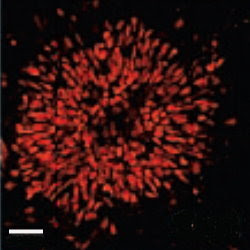 Posted by Neuromics at 4:37 AM No comments: Links to this post

Nestin as a Marker for Astrocytomas

I recently highlighted the growing parade of pubs referencing use of our reagents for Cancer Research.

I would like to add a new one. Angogenesis of Astrocytomas show stem like properties. This makes our Nestin Antibodies excellent markers.

Abstract: Angiogenesis involves a complex set of cell–cell and cell–extracellular matrix (ECM) interactions that coordinately promote and inhibit blood vessel growth and sprouting. Although many factors that promote angiogenesis have been characterized, the identities and mechanisms of action of endogenous inhibitors of angiogenesis remain unclear. Furthermore, little is known about how cancer cells selectively circumvent the actions of these inhibitors to promote pathological angiogenesis, a requisite event for tumor progression. Using mosaic mouse models of the malignant brain cancer, astrocytoma, we report that tumor cells induce pathological angiogenesis by suppressing expression of the ECM protein receptor αvβ8 integrin. Diminished integrin expression in astrocytoma cells leads to reduced activation of latent TGFβs, resulting in impaired TGFβ receptor signaling in tumor-associated endothelial cells. These data reveal that astrocytoma cells manipulate their angiogenic balance by selectively suppressing αvβ8 integrin expression and function. Finally, these results show that an adhesion and signaling axis normally involved in developmental brain angiogenesis is pathologically exploited in adult brain tumors.

Posted by Neuromics at 4:14 AM No comments: Links to this post

We continue to grow our capaibilities and abilities to serve Cancer Researchers.

We recently highlighted the potency of our i-Fect ™ siRNA transfection kits for deliveriny siRNA to glioblastomas. 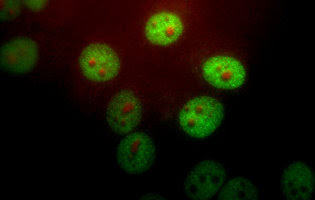 Neuroinflammation has been shown to be a potent negative regulator of stem cell and progenitor cell proliferation in the neurogenic regions of the brain.

Abstract:Adult stem cells are present in many tissues including, skin, muscle, adipose, bone marrow, and in the brain. Neuroinflammation has been shown to be a potent negative regulator of stem cell and progenitor cell proliferation in the neurogenic regions of the brain. Recently we demonstrated that decreasing a key neuroinflammatory cytokine IL-1β in the hippocampus of aged rats reversed the age-related cognitive decline and increased neurogenesis in the age rats. We also have found that nutraceuticals have the potential to reduce neuroinflammation, and decrease oxidative stress. The objectives of this study were to determine if spirulina could protect the proliferative potential of hippocampal neural progenitor cells from an acute systemic inflammatory insult of lipopolysaccharide (LPS). To this end, young rats were fed for 30 days a control diet or a diet supplemented with 0.1% spirulina. On day 28 the rats were given a single i.p. injection of LPS (1 mg/kg). The following day the rats were injected with BrdU (50 mg/kg b.i.d. i.p.) and were sacrificed 24 hours after the first injection of BrdU. Quantification of the BrdU positive cells in the subgranular zone of the dentate gyrus demonstrated a decrease in proliferation of the stem/progenitor cells in the hippocampus as a result of the LPS insult. Furthermore, the diet supplemented with spirulina was able to negate the LPS induced decrease in stem/progenitor cell proliferation. In a second set of studies we examined the effects of spirulina either alone or in combination with a proprietary formulation (NT-020) of blueberry, green tea, vitamin D3 and carnosine on the function of bone marrow and CD34+ cells in vitro. Spirulina had small effects on its own and more than additive effects in combination with NT-020 to promote mitochondrial respiration and/or proliferation of these cells in culture. When examined on neural stem cells in culture spirulina increased proliferation at baseline and protected against the negative influence of TNFα to reduce neural stem cell proliferation. These results support the hypothesis that a diet enriched with spirulina and other nutraceuticals may help protect the stem/progenitor cells from insults. Figure 7. Spirulina increases proliferation of human neural stem cells in vitro and protects against a TNFα insult.

Figure: Human neural progenitors grown under proliferation conditions were assessed by MTT assay (A) or BrdU (B) for the effects of 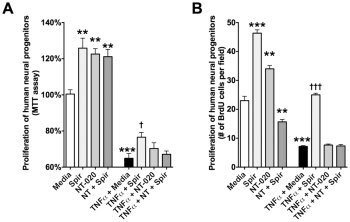 spirulina (125 ng/ml) or NT-020 (500 ng/ml) or the two treatments combined in the presence or absence of TNFα (20 ng/ml) for 72 hours. (A) The MTT assay shows that spirulina alone or NT-020 alone increase proliferation; surprising, the in combination proliferation is decrease compare to control ** p less tan 0.005.

Posted by Neuromics at 4:33 AM 2 comments: Links to this post