Researchers frequently reference use of Neuromics' Stem Cell Markers in publications. This is an important affirmation for us as these tools are critical for determining the differentiation state of Stem Cells. In this publication, the authors use our Mouse Monoclonal Nestin Antibody to understand the mechanisms underlying neural progenitor differentiation and neuronal fate. This understanding is an important precursor for using these cells in Regenerative Medicine: Serafí Cambray, Charles Arber, Graham Little, Antonios G. Dougalis, Vincenzo de Paola, Mark A. Ungless, Meng Li and Tristan A. Rodríguez. Activin induces cortical interneuron identity and differentiation in embryonic stem cell-derived telencephalic neural precursors. Nature Communications 3, Article number: 841 doi:10.1038/ncomms1817. Received 10 January 2011 Accepted 29 March 2012 Published 15 May 2012.

In this study, the authors show that Activin provides telencephalic neural precursors with positional cues that specifically promote the acquisition of a calretinin interneuron fate by controlling the expression of genes that regulate cortical interneuron identity. This work demonstrates a novel means for regulating neuronal differentiation and specification of subtype identity. 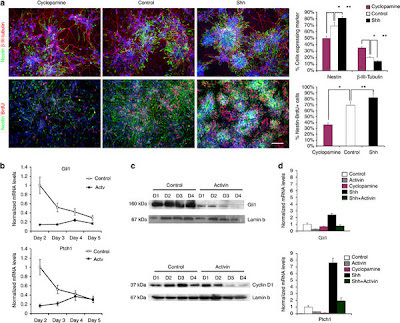 Image: Model for how Activin induces the differentiation and CGE fate in telencephalic neuronal precursors.


The protocol described in this manuscript represents a method to obtain an enriched source of calretinin interneurons from both mouse and human ESCs. Therefore, our work significantly contributes to the aim of generating the diverse neuronal subtypes required for the safe and successful use of ESCs in regenerative medicine.

The capabilities of stem cells markers matter in developing protocols for use in Regenerative Medicine.
Posted by Neuromics at 6:32 AM 2 comments: Links to this post

Chemotherapy can induce painful peripheral neuropathy and also have a toxic effect on peripheral nerves. The authors here show that that cisplatin produces hyperalgesia and toxicity to sensory neurons as indicated by neurochemical, morphological, and functional measures. Increasing AEA signaling at CB1 receptors not only reduced the hyperalgesia but reduced the neurotoxicity of cisplatin as well:  Iryna A. Khasabova,Sergey Khasabov, Justin Paz, Catherine Harding-Rose, Donald A. Simone, and Virginia S. Seybold. Cannabinoid Type-1 Receptor Reduces Pain and Neurotoxicity Produced by Chemotherapy. The Journal of Neuroscience, 16 May 2012, 32(20): 7091-7101; doi: 10.1523/​JNEUROSCI.0403-12.2012.

The authors use our guinea pig TRPV1 antibody to measure cisplatin hyperalgesia vs treated and control mice.

Images: URB597 attenuated effects of cisplatin on protein expression in DRGs. A, TRPV1- and ATF-3-ir were detected by immunofluorescence in L3–L5 DRGs from mice treated with vehicle, cisplatin, or cisplatin plus URB597. Cisplatin (1 mg/kg of body weight, daily for 7 d, i.p.) increased the occurrence of TRPV1- and ATF3-ir in neurons. Co-injection of URB597 (0.3 mg/kg daily, i.p.) with cisplatin attenuated the effect cisplatin on protein-ir. Scale bars: 10 μm (for images within each antigen). B, Quantitative summary of the effect of treatments on TRPV1-ir in neurons. Data are expressed as the mean ± SEM. aSignificantly different from each other group (p < 0.05, one-way ANOVA with Student–Newman–Keuls test; n = 4 mice/treatment). C, Quantitative summary of the effect of treatments on ATF-ir in neurons. Data are expressed as the median and 25th and 75th percentile range. *Significantly different from vehicle control and cisplatin plus URB597 groups (n = 6 mice/treatment; p < 0.001, Kruskal–Wallis ANOVA on ranks test).

I am pleased to feature our Guinea Pig P2X3 Antibody as a tool for studying the root causes of Neuropathic Pain.

In this study, the authors showed ablation of nonpeptidergic fibers in a chronic constriction injury model caused significant sympathetic and parasympathetic P2X3 fiber sprouting, and led to an exacerbated pain response. This was an unexpected finding, as it has been suggested that nonpeptidergic fibers play a major role in mechanical pain, and suggests that these fibers play a complex role in the development of neuropathic pain: Anna M.W. Taylora, Maria Osikowicza, Alfredo Ribeiro-da-Silva. Consequences of the ablation of nonpeptidergic afferents in an animal model of trigeminal neuropathic pain. PAIN. Volume 153, Issue 6, June 2012, Pages 1311–1319. doi.org/10.1016/j.pain.2012.03.023....Sections were then incubated for 48 hours at 4°C with a guinea pig polyclonal anti-P2X 3 antibody (1:25,000; Neuromics, Edina, MN, USA), diluted in PBS-T. Following primary antibody incubation, sections were treated with a biotin-conjugated... 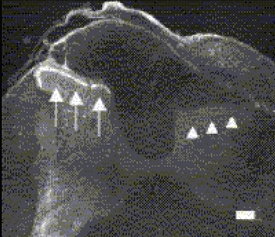 Check out our related reagents categories:

I will continue to post important findings related to the root causes of Neuropathic Pain.

I would like to share a pathway map that gives a snapshot of these pathways:
Regenerative Biology of the Spine and Spinal Cord. Edited by: Rahul Jandial, Mike Y. Chen, Bihong T. Chen and Joseph Ciacci. ISBN: 978-1-4614-4089-5. Publication date: May 25, 2012. Series: Special Books

I will continue to post information that will enable the researchers to harness the power of Mesenchymal Stem Cells.
Posted by Neuromics at 11:36 AM No comments: Links to this post

Overview: Introduction: Although the prevalence of arthritis dramatically increases with age, the great majority of preclinical studies concerning the mechanisms that drive arthritic joint pain have been performed in young animals. One mechanism hypothesized to contribute to arthritic pain is ectopic nerve sprouting; however, neuroplasticity is generally thought to be greater in young versus old nerves. Here we explore whether sensory and sympathetic nerve fibers can undergo a significant ectopic nerve remodeling in the painful arthritic knee joint of geriatric mice.

In other words, there is a clear root reason that the pain arthritis sufferers experience increases overtime. Here's some related data. Notice the increase in labeled nerves: 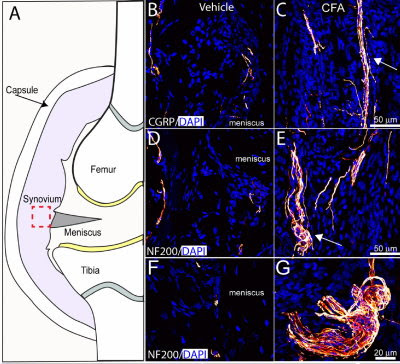 Images. Sensory nerve fiber sprouting and formation of neuroma-like structures in the painful geriatric arthritic knee joint. Schematic of a frontal view of a cross-sectioned mouse knee joint (A). The red square illustrates the synovial region from which the confocal images were obtained. Representative confocal images of calcitonin gene-related peptide (CGRP+), neurofilament 200 kDa (NF200+) sensory nerve fibers (yellow/orange) and growth associated protein (GAP43; marker of fibers undergo regeneration, yellow/orange) and DAPI labeled nuclei (blue) in knee joint sections (20 μm thick) of vehicle-injected (B,D,F) and CFA-injected (C,E,G ) mice. In vehicle-injected mice, a low level, regular pattern of innervation by CGRP+ and NF200+ fibers is observed in the synovial space of the knee joint. Twenty-eight days following the initial CFA injection, a significant number of CGRP+ and NF200+ nerve fibers have sprouted and have a disorganized appearance as compared to vehicle-injected mice. Note that, CGRP+ and NF200+ sprouted nerve fibers are localized in the synovium and are not observed in the meniscus of the joint. Furthermore, there was formation of neuroma-like structures in the synovium of the geriatric mice injected with CFA (G).

Posted by Neuromics at 6:50 AM 2 comments: Links to this post