Images: expression of prokineticin receptors in human and rat tissues. (A) Immunohistochemical analysis of PKR1 expression in the myenteric and submucosal ganglia of human stomach, ileum, and colon. Pkr1 (B) and Pkr2(C) expression in a range of human tissues determined using qRT-PCR. (D, E) Immunohistochemical of PKR1 distribution in rat DRG showing an absence of expression in large diameter, NF200 positive neurons (D), but co-expression with TRPV1 in presumptive nociceptive sensory neurons (E). (F) Distribution of Pkr2 mRNA by in situ hybridization in rat DRG. The IHC/ISH images shown are representative of the data obtained from n = 3 donors/animals.

Check out our Pain and Inflammation Research Antibodies.
Posted by Neuromics at 5:21 AM No comments: Links to this post

Our Guinea Pig P2X3 Antibody has historically been one of our most popular Purinergic Receptor Antibodies. It has been frequently cited in publications.

We exhausted our supply of the antibody in the spring of 2011 and it took us many rounds with multiple partners and a degree of disappointing results. Well our efforts have finally yielded the positive testing results required to again provide users this important antibody. Here're related images from our internal testing: 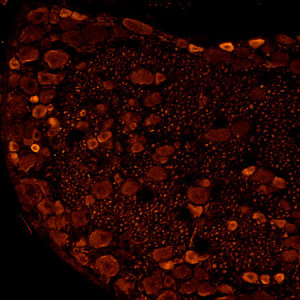 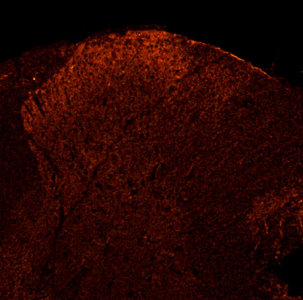 
Posted by Neuromics at 5:22 PM No comments: Links to this post

What causes Muscular Dystrophies like Limb girdle muscular dystrophy type 2H (LGMD2H)? Here researchers demonstrate for the first time that TRIM32 is expressed in the skeletal muscle stem cell lineage of adult mice, and that in the absence of TRIM32, myogenic differentiation is disrupted. Moreover, they show that the ubiquitin ligase TRIM32 controls this process through the regulation of c-Myc, a similar mechanism to that previously observed in neural progenitors. Importantly, they show that loss of TRIM32 function induces a LGMD2H-like phenotype and strongly affects muscle regeneration in vivo. These studies implicate that the loss of TRIM32 results in dysfunctional muscle stem cells which could contribute to the development of LGMD2H: Nicklas S , Otto A , Wu X , Miller P , Stelzer S , et al. 2012 TRIM32 Regulates Skeletal Muscle Stem Cell Differentiation and Is Necessary for Normal Adult Muscle Regeneration. PLoS ONE 7(1): e30445. doi:10.1371/journal.pone.0030445.

Stem Cell Markers  like PAX7 are important for types of studies. PAX7 is a marker for muscle progenitors or stem cells. If these cells fail to differentiate the level of PAX7 expression will remain high. MyoD is an indicator for successfully differentiating cells. As a consequence, MyoD expression levels increase within the cell and the ratio of Pax7:MyoD is reduced, thus inhibiting proliferation and inducing differentiation through Myogenin expression. In the absence of TRIM32, this balance of Pax7:MyoD is dysregulated, because degradation of c-Myc is not initiated, MyoD levels do not increase and Myogenin expression is not activated. 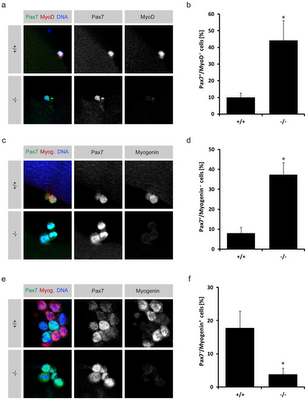 
Check out our more publications referencing use of our PAX7.
Posted by Neuromics at 7:05 AM No comments: Links to this post 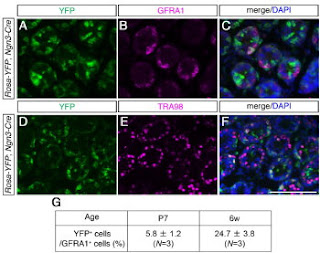 I will keep you posted on new developments.
Posted by Neuromics at 10:06 AM No comments: Links to this post

As we age, selective BDNF receptors increase in the the dorsal vagal complex (DVC), the brainstem center mediating the satiety reflex. Aging also affects the suppressor of cytokine signaling-3. This results in abnormal responses to BDNF and Leptin Signaling.

The authors used our BDNF Antibody to determine expression in the DVC.....goat serum and 0.3% Triton-X-100) (Sigma–Aldrich), overnight at 4 °C with chicken anti-rat BDNF antibody (Neuromics, Edina, MN; diluted 1/200 in blocking buffer), rinsed 3× 10 min in fresh PBS and incubated for 2 h, in the dark...

These findings could lead to potential therapies based on modulating BDNF expression in the DVC.
Posted by Neuromics at 3:35 PM No comments: Links to this post