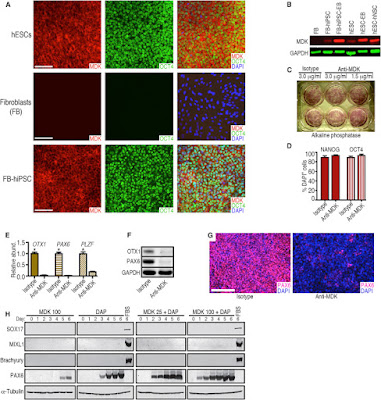 Images: MDK Expression in Pluripotent and Differentiated Cells and Disruption of Neural Conversion by a Monoclonal Antibody against MDK (A) Representative immunocytochemical analysis of MDK expression by hESCs (WA09), skin fibroblasts (FB, line HS27), and fibroblasts (HS27) after reprogramming to hiPSCs. Scale bars represent 100 μm. (B) Western blot showing that MDK was not detected in HS27 fibroblasts but was expressed in WA09 hESCs and hiPSCs from HS27 fibroblasts, and was upregulated in differentiating cells (EBs and hNSCs from hESCs). Probing for GAPDH demonstrated similar loading of the lanes. (C) A monoclonal antibody against MDK did not impair pluripotent self-renewal of hESCs. Antibody concentrations are shown. (D) The percentage of pluripotent cells expressing OCT4 and NANOG did not differ significantly between anti-MDK and isotype control antibody treatment (3.0 μg/mL). Error bars represent SEM; n = 5. (E) qRT-PCR showed that a monoclonal antibody against MDK (1.5 μg/mL) inhibits neural gene expression during 6-day DAP treatment. Error bars represent mean + SEM, n = 3. ∗p less than  0.05. (F) Western blot analysis confirmed the inhibitory effect of anti-MDK on early neural marker expression (OTX1, PAX6), despite DAP treatment, in contrast to the isotype control. (G) Immunocytochemical evidence that neural conversion is inhibited by the anti-MDK antibody (1.5 μg/mL) during 6-day DAP treatment. Few cells induced PAX6 expression in the presence of anti-MDK antibody (right panel). Scale bar represents 200 μm. (H) Western blot analysis and time course of hESCs differentiated for 6 days with recombinant MDK alone (100 ng/mL) or a combination of the DAP cocktail and MDK (25 or 100 ng/mL) suggest that MDK specifically promotes neural commitment of hPSCs. SOX17, MIXL1, and Brachyury were not induced by MDK. In contrast, controls treated with fetal bovine serum (FBS) for 6 days, which stimulates multi-lineage differentiation of hPSCs, induced these non-neural markers.
This level of basic research yield knowledge that is important for the development of future cell based therapies for Neuro-related Diseases. We will continue to post updates here.
Posted by Neuromics at 5:09 AM No comments: Links to this post 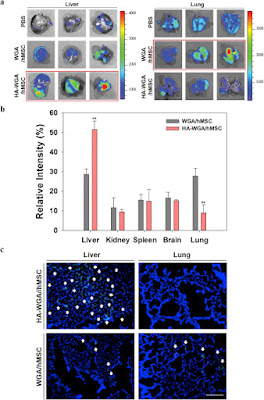 Images: Fluorescence microscopic images of dissected livers and lungs from normal rats 4 h after intravenous injection of PBS, WGA-FITC/hMSC, and HA-WGA-FITC/hMSC (Filter for FITC). (b) Quantification of hMSCs in dissected organs estimated from ROI (n = 3). **P versus the WGA/hMSC group. (c) Representative fluorescence microscopic images of WGA-FITC/hMSC and HA-WGA-FITC/hMSC in the liver and lung (green = FITC, blue = DAPI for nucleus). Arrows indicate the location of hMSCs (scale bar = 200 μm). http://dx.doi.org/10.1016/j.biomaterials.2016.08.027
Protocol: Cultured MSCs were trypsinized, washed, and resuspended at 1 × 106 cells/mL in PBS. HA-WGA conjugate at 10 μg/mL of WGA was added to MSCs in suspension, and incubated in an ice bath for 10 min with mild mixing. To remove the unbound HA-WGA conjugate to MSCs, cell suspension was washed with PBS and collected by centrifugation (1000 × g, 3 min at 4 °C). After surface modification with HA-WGA conjugate, HA-WGA/hMSC were resuspended in the cell culture medium on 96-well plates (1 × 104 cells per well). At the predetermined time, cell viability of HA-WGA/hMSC was measured using an EZ-cytox cell viability assay kit according to the manufacturer’s instructions. Zeta potentials were analyzed using a Zetasizer Nano (Malvern Instruments, UK) to assess the change of surface charge after the surface modification.
Conclusions: Researchers successfully developed a target-specific systemic delivery system of MSCs to the liver using HA-WGA conjugate. HA-WGA conjugate was synthesized by the coupling reaction of HA-aldehyde with amine group of WGA. GPC analysis revealed the successful synthesis of HA-WGA conjugate. CD analysis corroborated that the secondary structure of WGA remained stable even after conjugation to HA. HA-WGA conjugate appeared to bind to the surface of MSCs and remain stably for up to 1 h. After cell surface modification, most of HA-WGA/MSC complex could be systemically delivered to the liver 4 h after intravenous injection, whereas MSCs were trapped mainly in the lung. This new strategy to target-specifically deliver MSCs to the liver using HA-WGA conjugate might be successfully exploited for treatment of various liver diseases.

We will continue to post new applications developed by users of our Stem Cells.
Posted by Neuromics at 7:25 AM No comments: Links to this post

More on Epigenetics and Pain

Our Markers and i-FectTM  Transection Kit are  used to study Epigenetics and pain. Here's yet another example: M. Leinders, b, N. Üçeyler, R.A. Pritchard, C. Sommer, L.S. Sorkin. Increased miR-132-3p expression is associated with chronic neuropathic pain. Experimental Neurology. Volume 283, Part A, September 2016, Pages 276–286...The inhibitor and mimetic were administered to awake rats via the it catheters. Prior to injection, active or mismatch inhibitors were mixed with (1:5 w/v) i-Fect™ in vivo transfection reagent(Neuromics, Edina, USA) to final doses of 5, 2 and 1 μg in 10 μl... 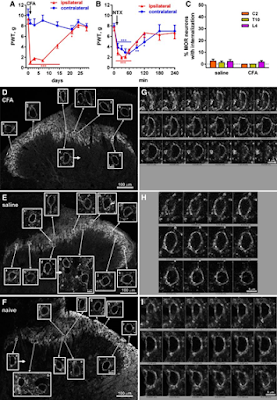 We are seeing a notable uptick in use of our Protein Purification Tools. This includes vectors and purification columns. We are especially delighted with the increased use of of our Strep-Tag + Strep-Tactin Columns. 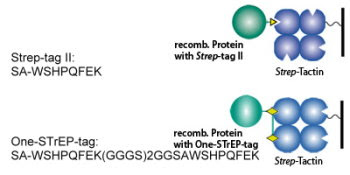 Figure: Strep-Tag+Strep-Tactin Methods
Here's an example of researchers using the technology to purify heme proteins for the study of the diptheria pathogen: Courtni E. Allen and Michael P. Schmitt. Utilization of Host Iron Sources by Corynebacterium diphtheriae: Multiple Hemoglobin-Binding Proteins Are Essential for the Use of Iron from the Hemoglobin-Haptoglobin Complex. J. Bacteriol. February 2015 vol. 197 no. 3 553-562. doi: 10.1128/JB.02413-14...Cell debris was removed by centrifugation at 12,000 × g at 4°C, and the supernatant fraction containing the soluble protein was purified on Strep-Tactin columns (Neuromics) for Strep-tagged constructs...

Figure: (A) HtaA and derivatives were assessed for the ability to bind Hb-Hp by ELISA. GST was included as a negative control. Experiments were repeated at least three times, with similar results. Results of a representative experiment are shown. (B) Binding of HtaA and various derivatives to Hb-Hp at a 200 nM concentration is shown. Binding of HtaA-Y361A and CR2-Y361A to Hb-Hp was significantly different from binding with HtaA-wt and CR2, respectively (**, P less than 0.0001). Binding of CR1 to Hb-Hp was significantly different from that with HtaA-wt (***, P less than 0.05). *, HtaA does not bind Hp (HtaA-Hp). Values represent the means from three independent experiments (±SD).

Looking for protein purification solutions? Do not hesitate to contact me: 612-801-1007 or pshuster@neuromics.com.
Posted by Neuromics at 7:31 AM No comments: Links to this post

Quality Counts
Cells are the foundation of Cell Based Assays. We provide High Quality Growth Factors to insure your success.  Here's a sampling of the categories available:

Images: GFP+ mMN Mouse Motor Neurons. Protocol includes addition of  Neuromics' Bioactive GDNF Recombinant Protein to media for expansion/differentiation.
We will continue to add new pubs and data on these as they become available.
Posted by Neuromics at 6:47 AM No comments: Links to this post