Holistic Medicine for the Brain

There is a slowly growing body of support for certain hallucinogenic serotonin-like molecules supporting cognitive gains, antidepressant effects and changes in brain areas related to attention, self-referential thought, and internal mentation. These molecules are present in Virola Ayahuasca and used in traditional native South American medicine.

Images: Cerebral organoids express 5-MeO-DMT receptors and different cell type markers (A) Cerebral organoids presenting smooth texture and homogeneous coloring at 45 days of differentiation (scale bar 1000 µm). (B) Cerebral organoids are not peer-reviewed) is the author/funder. It is made available under a CC-BY-NC-ND 4.0 International license. bioRxiv preprint first posted online Feb. 13, 2017; doi: http://dx.doi.org/10.1101/108159. The copyright holder for this preprint (which was 8 composed by several cell types, including mature neurons, as shown by MAP2 staining. (C) Cells expressing AMPAR1 are found in the organoid edge, while (D) cells expressing NMDAR1 and (E) GFAP are detected within the organoid. (F) Cells positive for 5-HT2A receptor, and (G) σ-1R, the primary molecular targets for 5-MeODMT, are also found in the organoid. Scale bars: A = 1000 µm; B = 50 µm; C, D, E, F, and G = 20 µm. (H) The expression of molecular targets for 5-MeO-DMT was also confirmed by RT-PCR.

Dimethyltryptamines should be studied further as potential therapies for depression and related disorders.
Posted by Neuromics at 1:12 PM No comments: Links to this post

More Hard to Find Human Cells
We are recognized for providing potent, pure and easy to culture CAFs and Immortalized Tumor Cells. We are pleased to announce the addition of Melanoma CAFS. Our introductory price is only 899 USD/1,000,000 Cells. They have been successfully passaged 10X. 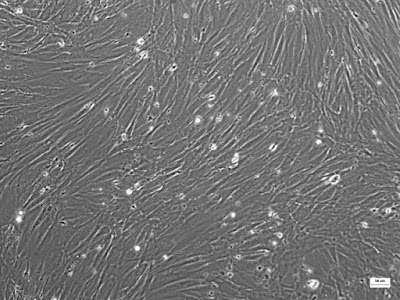 Posted by Neuromics at 11:47 AM No comments: Links to this post