We are pleased to announce addition of Antibody Arrays to our catalog. These are excellent tools for study apoptosis, inflammation, angiogenesis and  immune response and related autoimmune, inflammatory and degenerative diseases plus many forms of cancers. Check out this video. 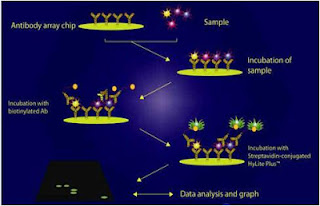 We will be aggresively adding new arrays to our product offerings in June. Stay tuned for more.﻿
﻿

Data-Publications
These markers a important tools for the study of Neuro-muscular diseases like Amyotrophic Lateral Sclerosis (ALS) and Multiple Sclerosis (MS).

For Neuromuscular Disease Researchers, we have some of the best Schwann Cell and Sensory/Peripheral Neuron Markers in the business. 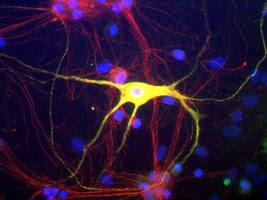 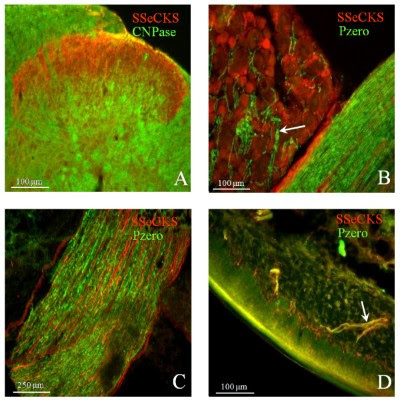 I will post new data and pubs as they become available.
Posted by Neuromics at 7:44 AM No comments: Links to this post

The Role of Obesity in Obstructive Sleep Apnea (OSA)

Scott Mesenger recently published a Master's Thesis that implicates compelling links between Leptin Signaling and OSA: http://ir.lib.uwo.ca/cgi/viewcontent.cgi?article=2487&context=etd. This work was done in the John Cirello Lab at University of Western Ontario. The study extensively uses our Ob-Rb Antibody to generate data.

There is a strong link between obesity and OSA. "Perhaps the single most important factor affecting OSA risk is body weight. Weight gain of 10% increases the risk of developing OSA by six-fold (Peppard et al., 2000a) and a 10% loss of body weight is estimated to decrease the apnea/hypopnea index (events/hour) by 26%  Within the obese population (BMI ≥ 30) (Wolk et al., 2003), approximately 40% experience significant OSA and approximately 70% of OSA patients are obese (Vgontzas et al., 1994), daunting numbers considering the obesity epidemic occurring in North America and estimates suggesting 41% of Americans will be obese by 2015 (Nejat et al., 2009)."

"Leptin can exert cardiovascular effects by acting centrally, as has been shown by studies introducing leptin directly into the CNS. Central administration serves to increase plasma catecholamines epinephrine and norepinephrine (Satoh et al., 1999). In other studies, leptin has been found to increase SNA, arterial pressure as well as heart rate and to inhibit the baroreflex (Arnold et al., 2009; Mark et al., 2009). Leptin may also have a role in modulating the peripheral chemoreflex at the level of the CNS as microinjection of leptin into caudal pressor areas of the NTS has been found to potentiate the sympathetic and blood pressure responses to chemoreflex activation (Ciriello & Moreau, 2012). These cardiovascular effects may not be debilitating under normal homeostatic conditions, however in conditions of increased circulating leptin, such as in OSA and obesity, the cardiovascular responses may be detrimental."

This study shows the increase in the expression of leptins like Ob-Rb in Carotid .

Images: Fluorescent (a-c) photomicrographs showing the effect of IH on Ob-Rb (a) and ERK 1/2 (b) expression in carotid body glomus cells. Note that Ob-Rb and ERK 1/2 are co-expressed in the same cells (c). Calibration mark in (a) represents 100 μm and applies to (a-c).

This study will give the reader great insights on the molecular biology of OSA. Check it out: http://ir.lib.uwo.ca/cgi/viewcontent.cgi?article=2487&context=etd.
Posted by Neuromics at 8:13 AM No comments: Links to this post

Inflammatory pain is often accompanied by a drop in pH (Acidosis). Here investigators hypothesized that modest drops in extracellular pH leading to calcium fluxes acts like a dynamic switch to rapidly mobilize trkA to the cell membrane surface of adult sensory neurons, which in turn serves to increase the sensitivity of these neurons to NGF. The findings reveal a cellular mechanism whereby even small changes in pH can rapidly shift sensitivity to a critical driver of the inflammatory pain state—NGF. They way they demonstrate this shift is quite ingenious: Geoffrey E. Bray, Zhengxin Ying, Landon D. Baillie, Ruiling Zhai, Sean J. Mulligan, and Valerie M.K. Verge. Extracellular pH and Neuronal Depolarization Serve as Dynamic Switches to Rapidly Mobilize trkA to the Membrane of Adult Sensory Neurons. The Journal of Neuroscience, 8 May 2013, 33(19):8202-8215; doi:10.1523/JNEUROSCI.4408-12.2013.

Images: Acidic pH challenge rapidly mobilizes trkA to the membrane from internal stores. A, Bar graphs summarize relative changes in neuronal cell-surface trkA expression from three separate experiments (detected with immunofluorescence) over neurons exposed to control (pH 7.4) or acidic (pH 6.5) media for 30 min with or without exposure to Golgi collapsing compound BFA and as normalized to the mean signal intensity from the control pH group. Note: A significant increase is observed in the mean levels of trkA mobilized to the neuronal membranes of sensory neurons in response to acidosis when compared with the control pH, a response that is blocked with BFA treatment. B, Immunofluorescence photomicrographs and summary histograms (C) depict degree of FM 1–43FX-stained neuronal membrane internalization in response to conditions as indicated. Note: Significant membrane internalization was only observed in the NGF challenge control group and not in response to acidic pH challenge with or without BFA treatment. (Data normalized to the control pH of each experimental condition and pooled from three separate experiments; A, C, one-way ANOVA with post hoc Tukey's, **< 0.01; ***< 0.001). Scale bar, 20 μm.

The heightened level of trkA activation likely has ramifications on both short- and long-term sensitization processes as it regulates the activity and expression of a wide variety of receptors, ion channels, and signaling molecules (Mantyh et al., 2011). In the short term, it modulates the activity of receptors and ion channels. For example, NGF decreases the threshold of activation of the nociceptive transient receptor potential vanilloid 1 (TRPV1) receptors (Chuang et al., 2001), mediates TRPV1 trafficking to the membrane (Stein et al., 2006), increases purinergic receptor P2X3-mediated currents and Ca2+ transients (D'Arco et al., 2007) and for sympathetic neurons, rapidly modulates the activity of at least four voltage-gated currents (Luther and Birren, 2009). In the long term, increased NGF can lead to increased transcription of many nociception-associated genes such as its receptors trkA and p75 (Verge et al., 1989, 1992); the neuropeptides Substance P, calcitonin gene-related peptide (Lindsay and Harmar, 1989; Verge et al., 1995), and PACAP; Jongsma Wallin et al., 2001, 2003); sodium channels (Dib-Hajj et al., 1998; Fjell et al., 1999; Kerr et al., 2001); and P2X3 (Ramer et al., 2001; Simonetti et al., 2006). It is also interesting to note that activation of trkA was linked in our study to a parallel activation of p38MAPK, which has been shown to be linked to NGF-mediated increases in ASIC3 expression during inflammation (Mamet et al., 2003).

Posted by Neuromics at 12:51 PM No comments: Links to this post

More on the Neurobiology of Itch

I have an earlier posting on neuro-transmission of itch or pruritis. This focused on the role of Toll-like Receptor 3 (TLR 3). This posting looks at the role of Gastrin-Releasing Protein (GRP) and the Gastrin-Releasing Protein Receptor (CRPR) in chronic itch. The findings are important because this condition affects millions worldwide and results in a costly erosion of quality of life. 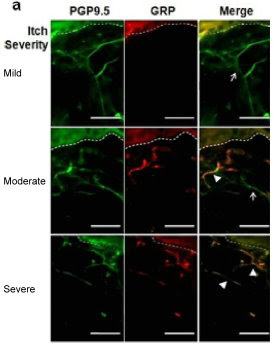 Images: Double labeling of PGP9.5 and GRP in skin of primates representing mild, moderate and severe itch. Primates with higher scratching severity showed in increase in the co-localization of PGP9.5 and CRP at the dermal-epidermal junctions (arrows).

In addition to increased PGP9.5/GRP expression in the skin, similar results were shown for expression of GRP/GRPR in DRGs. This makes GRP and its receptor candidate drug targets for chronic itch or pruritis in humans.

Posted by Neuromics at 7:03 AM No comments: Links to this post