No Pain; No Gain 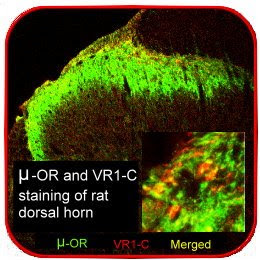 We work hard to make sure our Pain and Inflammation antibodies continue to be a gold standard for researchers. We follow up with virtually all researchers to make sure they work to expecations in each unique application.
We also look for references in current publication. Although published in 2006, this one just crossed our radar scope.
It contains multiple images of 3 of our top sellers: Mu Opioid Receptor, VR1 C-terminus (TRPV1) and VR1 N-Terminus (TRPV1).
Shao-Rui Chen and Hui-Lin Pan. Loss of TRPV1-expressing Sensory Neurons Reduces Spinal : Opioid Receptors but Paradoxically Potentiates Opioid Analgesia. J Neurophysiol (February 8, 2006). doi:10.1152/jn.01343.2005
Posted by Neuromics at 11:40 AM No comments:

Demographics point to increasing rates of Alhzheimer's Disease. This disease steals away the golden years of sufferers. It also costs society billions healthcare.

Research for the cure marches on. Researchers know the disease is characterizedby the deposition of amyloid β-peptide (A-Beta) in the brain. The challenge is finding a way to protect the brain from these depositions or reverse the process.
Dr. Isabel Cardoso and her team at Instituto de Biologia Molecular e Celular have recently published compelling work in this area. Here they provide more important evidence for the role of a Transthyretin (TTR) protective mechanism. This mechanism could include the removal of deposited A-Beta.
Rita Costa, Frederico Ferreira-da-Silva, Maria J. Saraiva, and Isabel Cardos. Transthyretin Protects against A-Beta Peptide Toxicity by Proteolytic Cleavage of the Peptide: A Mechanism Sensitive to the Kunitz Protease Inhibitor.
PLoS ONE. 2008; 3(8): e2899. Published online 2008 August 6. doi: 10.1371/journal.pone.0002899. 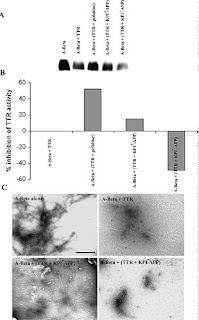 Neuromics' Reagent Used-APP 228
Posted by Neuromics at 8:28 AM No comments:

The application of live bacteria for cancer therapies holds promise. In this study, Escherichia coli K-12 colonization on the tumour microenvironment by immunohistochemistry and fluorescence microscopy in the murine 4T1 breast carcinoma model. MMP-9 and TNF-alpha expression is altered in the sites of tumors.

Interestingly, the authors observed a postive change in the expression of these proteins after colonization.

Parkinson's Disease Research Blog: Mitochondria or not, a reply

Parkinson's Disease Research Blog: Mitochondria or not, a reply
Posted by Neuromics at 6:23 PM No comments:

Hormone-sensitive lipase (HSL) is widely expressed in adipose tissue. Interestingly, HSL-null mice have been shown to be resistant to diet-induced obesity. Despite this characteristic, they can also show insulin resistance. This resistance is contributing factor in type 2 diabetes.

Scientists have also shown that pancreatic beta cells, responsible for insulin release, begin to malfunction when their cholesterol levels build up. So what is the link?

The study referenced here suggests that HSL plays a critical role in the hydrolysis of cytosolic cholesteryl esters and that increased levels of hepatic cholesteryl esters, due to lack of action of HSL in the liver, is the main mechanism underlying the imbalance in cholesterol metabolism in HSL-null mice.

Our customers have had success with these antibodies. 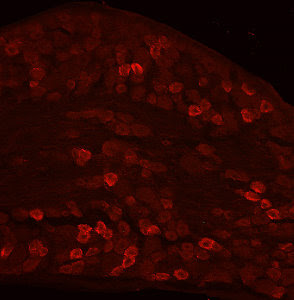 We are pleased to announce the release of a chicken Neurotensin Receptor 1 (NTS1).
Image: Immuofluorescent detection of NTS1 in cell bodies of neurons in rat dorsal root ganglia fluorescence).
Posted by Neuromics at 4:48 PM No comments: 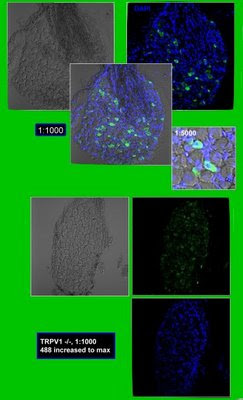 This excellent staining comes to us courtesy of Katharina Zimmermann (Childrens Hospital Boston, Clapham Lab). This is some of the best staining we've seen using our VR1 C-Terminus (TRPV1) - mouse specific antibody.

This is to highlight excellent work done by our friends at SRI and AfaSci.

Our Orphanin FQ ab was used in experiments by the team. Here's the latest publication highlighting their work:

...Brain sections (10 μm) were treated with 0.3% H2O2 to quench endogenous peroxidases and then incubated overnight in primary anti-N/OFQ (1:5,000; RA10106, anti-FGGFTGARKSARKLANQ, Neuromics) and anti-orexin-B (1:5,000; sc-8071, Santa Cruz Biotechnology Inc.) antisera at 4°C with agitation. Sections were incubated in blocking buffer for 1 hour, followed by a 2-hour incubation at room temperature in secondary antisera (Alexa Fluor 546 donkey anti-goat [1:750] and 488 donkey anti-rabbit [1:500]; Molecular Probes, Invitrogen). As a negative control, additional sections were treated similarly, but the primary antibody was omitted. Preadsorption with the N/OFQ peptide FGGFTGARKSARKLANQ was used as a positive control and blocked all specific staining as also found by others... 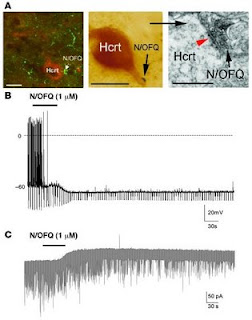 N/OFQ-containing fibers innervate Hcrt neurons, and N/OFQ inhibits Hcrt neuronal activity. (A) Left panel shows confocal image of N/OFQ-immunoreactive fibers in the vicinity of, and in putative contact with, Hcrt-immunoreactive neurons in the PLH of WT mice. N/OFQ (green) fibers are in close proximity to Hcrt-immunoreactive (red) cells. The arrow indicates the N/OFQ innervation of an Hcrt cell body. Middle panel shows light micrograph of a light brown immunolabeled Hcrt neuron contacted by a dark black bouton (arrow) representing immunolabeling for N/OFQ. Right panel shows electron micrograph taken from ultrathin sections of the same labeled terminal and dendrite shown in the light micrograph in the middle panel. Black arrow indicates the N/OFQ-immunolabeled axon terminal in synaptic contact (red arrowhead) with the dendrite of the Hcrt cell. Scale bars: 10 μm (left and middle panels); 1 μm (right panel). (B) Under current clamp, bath application of N/OFQ (1 μM) hyperpolarized Hcrt neurons, decreased input resistance, and blocked spontaneous firing of action potentials. The resting potential of this cell was –54 mV and was manually adjusted to –60 mV with DC current. Membrane resistance was monitored using hyperpolarizing current pulses (–0.3 nA, 800 ms) delivered every 5 seconds throughout the experiment. (C) Under voltage-clamp mode at a Vh of –60 mV, N/OFQ (1 μM) induced an outward current (–53 pA) in an Hcrt neuron. Notice that the frequency but not the amplitude of the miniature synaptic currents (inward currents) recorded in the presence of TTX (0.5 μM) was also reduced.
Posted by Neuromics at 12:31 PM No comments: