Potent, Pure and Easy to Culture

We are often asked how our human primary astrocytes stack up versus engineered astrocyte cell lines. Astrocyte cultures, whether primary or engineered, need to mimic how they work in-vivo.

With the exception of glutamate uptake, our primary cells talk and walk like astrocytes. We do plan on running assays to test for glutamate uptake as we believe the cells are capable. 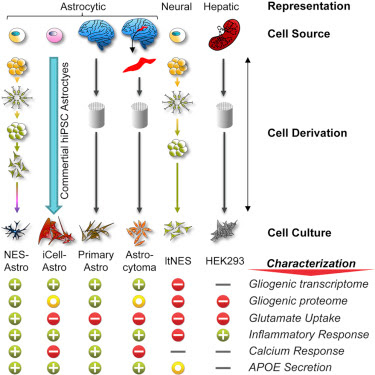 It is important that all our human neurons, astrocytes, microglia and schwann cells are potent, pure and easy to culture. As you can see from this graphic, our "primary astros" our positive for most the required characteristics.
Posted by Neuromics at 1:44 PM No comments:

Silencing Lactate Dehydrogenase A in vivo

Pathologic CNS is characterized by neuronal damage that leads to the release of intracellular components. However, the effect of damaged cells on angiogenesis has not been clarified. This study revealed that LDHA, which is a known damage marker, promotes CNS-specific angiogenesis. LDHA-mediated angiogenesis depends on vimentin on the surface of vascular endothelial cells. The work described here proposes a novel mechanism by which neurodegeneration drives angiogenesis in the CNS. 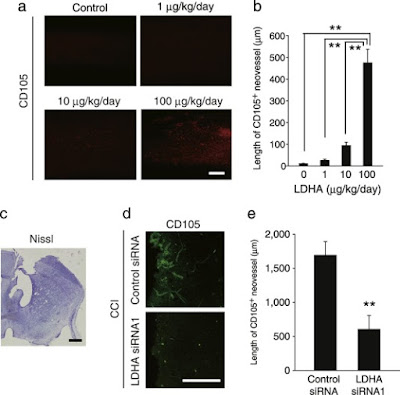 The findings reveal unexpected neurovascular interactions in the injured adult CNS that may be relevant to our understanding of neuronal damage, which is a hallmark of many CNS disorders
Posted by Neuromics at 4:55 AM No comments:

Potent, Pure and Easy to Culture

We are pleased to announce the addition of Human Neural Progenitors to our Primary and Stem Cell offering. 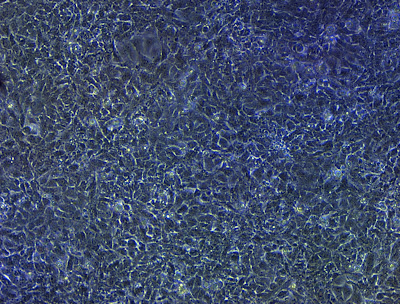 Human Neural Progenitors at 95% Confluency
Cell potency, for us, includes the how well our cells can be differentiated into terminal types. For these progenitors, we have protocols for differentiating into neurons, astrocytes, and oligodendrocytes.

Posted by Neuromics at 6:22 AM No comments:

There have been several publications referencing use of our growth factors in 3-D Cultures. It is important that potent growth factors are used to ensure proper cell growth and differentiation.

Here's a new publication referencing use of our ISOKineTM FGF. Our ISOKine growth factors are produced in the endosperm tissue of barley grain (Hordeum vulgare), that exhibits up to 50 times less protease activity than E.coli or mammalian cells. Barley seed is void of any human or animal viral contaminants that could jeopardize your cell culture. 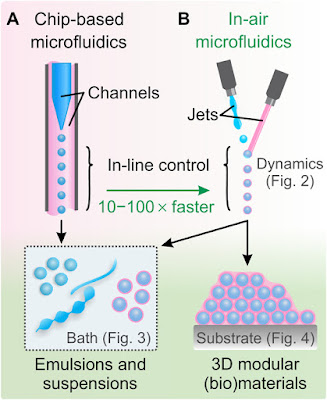 Figure: Concept of IAMF and guide to the article. (A) Chip-based microfluidics enables in-line control over droplets and particles, making it a versatile platform technology. A chip design where droplets (blue) are transported by a coflow (pink) is shown. (B) IAMF maintains the in-line control of chip-based microfluidics but relies on jet ejection and coalescence into air. Therefore, a wide range of droplets and particles can be produced at flow rates typically two orders of magnitude higher than with chip-based microfluidics. When combining reactive, solidifying microjets, IAMF also enables on-the-fly production and direct deposition of microparticles into 3D multiscale modular (bio)materials.

Figure: One-step additive manufacturing and injection molding of 3D multiscale modular (bio)materials. (A) Modular free forms with a controlled microarchitecture were manufactured by stacking of shape-stable core-shell particles. (B to D) A hollow cylinder was formed by deposition of the composite jet onto a rotating substrate. By altering the building blocks’ composition, the resulting microarchitecture consisted of (C) a liquid-filled foam or (D) a multimaterial modular solid, where the cross-linker for the core was added to the shell and vice versa. (E) To eject a modular filler, only the droplets’ cores are solidified in the air, whereas the slower solidifying shells enable seamless filling of the mold. (F to H) A modular construct was produced by filling a bone-shaped mold. Inset: Hydrogel construct while still in the mold. The 3D multiscale modular material consisted of MSCs (pink), encapsulated in alginate microspheres (green) that are embedded in dextran-tyramine hydrogel (red). (I) Injection-molded multiscale modular tissue construct with optimized cellular micro- and macroenvironments. The construct consisted of insulin-producing pancreatic β cells (MIN6; beige with blue nuclei) that were encapsulated in alginate microparticles (green). The cell-laden microparticles were encapsulated within a proangiogenic fibrin network that contained human endothelial and stem cells (pink with blue nuclei). The microenvironments supported MIN6 cell proliferation, whereas the macroenvironment supported the formation of an endothelial cellular network within 7 days of in vitro culture. HUVEC, human umbilical cord endothelial cell. Scale bars, 1 cm (B and F), 5 mm (G), and 100 μm (C, D, H, and I).

We live in a 3-D world and 3-D Cell and Tissue Based Assays are a major focus for us. This includes bioinks for 3-D printing.
Posted by Neuromics at 6:24 AM No comments:

From Healthy and Diseased Donors
We continue to add human primary and derived cells important to your research.

We now have Human Hepatocytes. They come from healthy and drug-addicted donors.

Like all our cells, these are potent, pure and easy to culture. 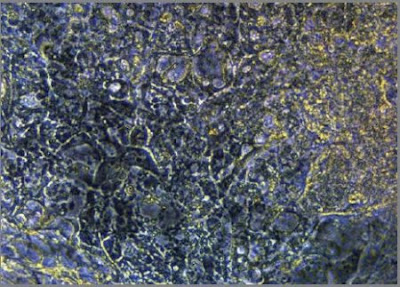 Here's to exciting discoveries.
Posted by Neuromics at 7:32 AM No comments: