They Survive to Thrive

I am pleased to announce the addition of Stress Selected Stem Cells to our Cell Based Assays Offerings. 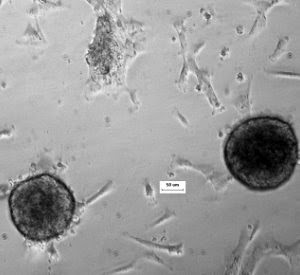 Image: Further morphology of these cultures is shown above as phase contrast images of two prominent clusters together with more firmly attached cells of classical mesenchymal morphology. This is day seven following exposure to stress. Scale bar is 50 mm.

Check out our presentation learn more: 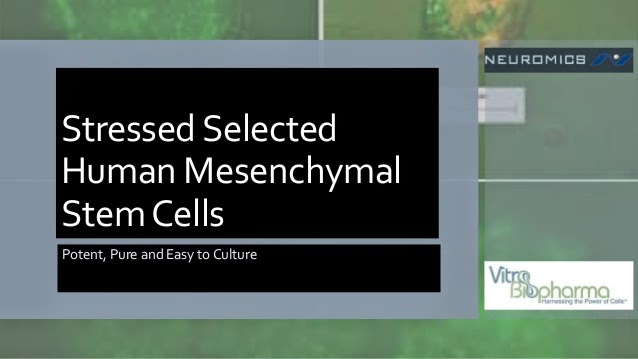 We can also conduct contract research to meet your specific requirements. To learn more you can contact me @612-801-1007 or pshuster@neuromics.com.

Posted by Neuromics at 1:14 PM No comments:

Abstract: A critical challenge to regenerating close mimics of native axonal pathways under chronic neurodegenerative disease or injury conditions is the inability to stimulate, sustain and steer neurite outgrowth over a long distance, till they reach their intended targets. Understanding neurite outgrowth necessitates quantitative determination of the role of molecular gradients on growth cone navigation under dynamic physiological conditions. High-fidelity biomimetic platforms are needed to computationally and experimentally acquire and analyze spatio-temporal molecular gradient evolution and the growth cone response across multiple conditions along this gradient pathway. In this study, we utilized a simple microfluidic platform in which diffusive gradients were generated within a 3D porous scaffold in a defined and reproducible manner, and its characteristics (spatio-temporal gradient, steepness, diffusion time, etc.) precisely quantified at every specific location within the scaffold. Using this platform, we show that the cortical neurite response within 3D collagen scaffolds, at both the cellular and molecular level, is extremely sensitive to subtle changes in localized concentration and gradient steepness of IGF-1 within that region. This platform could also be used to study other biological processes such as morphogenesis and cancer metastasis, where chemogradients are expected to significantly regulate the outcomes. Results from this study might be of tremendous use in designing biomaterial scaffolds for neural tissue engineering, axonal pathway regeneration under injury or disease, and in formulating targeted drug delivery strategies. 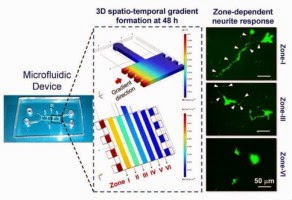 Image: Neurons in 3-D Assay
Neuromics' provides many Stem and Primary Cell Assay Solutions including tools for 3-D Cultures. We also offer services studying the effects of small molecules and compounds on Stem Cell expansion, differentiation and migration. To learn more contact me at 612-801-1007 or pshuster@neuromics.com.
Posted by Neuromics at 4:25 AM No comments:

We have been testing immune/inflammatory response, oxidative stress and growth factor markers in ASD children from central Europe. Most showed high levels of  related cytokines and chemokines.

From our initial testing and published results, we have developed a custom Quantibody Array to test ASD children. The markers in this array are: BDNF, HSP-70, Leptin, RAGE and TGF-beta1. 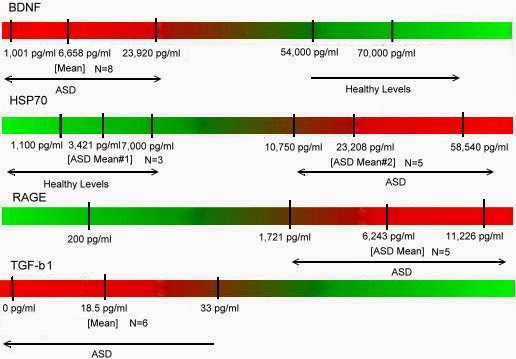 Here's more on each marker:

We plan to significantly increase the samples of ASD children tested using this custom Quantibody Array. .

Our ultimate goal is to use this array as a tool to determine the efficacy of therapies we are developing. Our goals is to develop natural products based therapies that are proven to activate stem cells. These cells could catalyze immune response modulation and tissue repair. The process is to first clear metals and pathogens, then treat with stem cell activators and test and fine tune treatments and test again.

I will be posting results on an ongoing basis. I also welcome any and all comments. I am available for direct contact at pshuster@neuromics.com or 612-801-1007.
Posted by Neuromics at 1:34 PM No comments:

We are pleased to announce the addition of Pancreatic Tumor Cells to our Cell Based Assay offerings. We are also generating a wealth of internal data with our Tumor Cells and Cancer Associated Fibroblasts. We have now opened up our capabilities to Cancer Researchers via our new CRO services. These included customized assays for studying toxicity using compounds/small molecules. Here's an example: 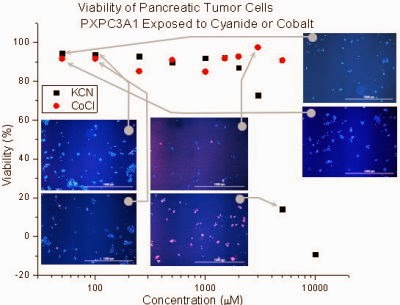 In addition, we can do kinetic, live cell screens using these cells plus our hMSC and CAFs. To learn more call 612 -801-1007 e-mail me: pshuster@neuromics.com. We stand ready to serve you in a way that fits your specific requirements.