Pain and the Interplay Between P2Y Receptors with P2X3

Alfredo Ribeiro-da-Silva and his team use our Purinergic Receptor Antibodies to the study role of their expression in Nociceptive and Neuropathic Pain. They referenced their use in 8 publications.

Based on their research, they suspect changes in P2X3 function under pathological conditions are more complex than simple up- or down-regulation of expression at the protein level. This would have profound implications for the dicovery of drugs that target P2X3 expression levels: Gary Mo, Jennifer C. Peleshok, Chang-Qing Cao, Alfredo Ribeiro-da-Silva and Philippe Séguéla. Control of P2X3 channel function by metabotropic P2Y2 UTP receptors in primary sensory neurons. Molecular Pharmacology Fast Forward. Published on December 18, 2012 as doi:10.1124/mol.112.082099. 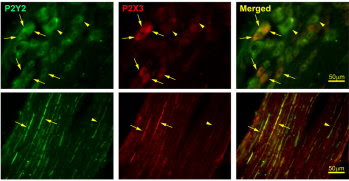 Images: P2X3 and P2Y2 receptors are co-expressed in rat DRG sensory neurons.(A) DRG sections labeled for P2Y2 (green) and P2X3 (red) and merged (yellow). P2Y2 immunoreactivity is broadly distributed in small-diameter neuronal somata and co-localized with P2X3 (arrows). P2Y2 immunoreactivity can be detected in cells negative for P2X3 (arrow heads). (B) P2Y2 (green) and P2X3 (red) are also colocalized (yellow) in peripheral nerve fibers.
The two receptors were found to be colocalized both in cell bodies and nerve fibers, indicating co-trafficking to peripheral and central terminals. The immunolocalization evidence presented here provides valuable information on the physiological relevance of crosstalks between ionotropic and metabotropic ATP receptors in sensory pathways, yet much work is still needed to fully comprehend the role of nucleotide signaling in pain, especially in pathological conditions. Changes in P2Y2 receptor expression in response to inflammation have been documented (Malin et al., 2008), therefore it will be worth investigating the functional impact of P2Y2-P2X3 interactions on ATP signaling under chronic pain conditions.


I will keep you posted on any new developments.
Posted by Neuromics at 9:56 PM