We consider everything genesis as a core focus area. This includes embryogenesis, angiogenesis, neurogenesis and stem cell expansion and differentiation. This is important because there is an intersection between reagents and methods for studying embryo development and genesis pathways in "adult systems".

CD antigens serve as markers for growth and development. We are always on the look out for Customer Publications that reference use of these reagents in related applications. Here's one that just pinged our radar. 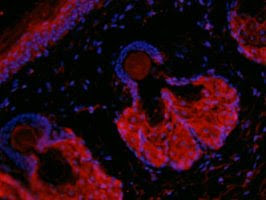