We continue to add to our catalog of Neurodegenerative Disease Reagents:

BACE-1
Cleavage of amyloid precursor protein (APP) into 40 or 42 amino acid amyloid β (aβ) peptides is a result of the action of two proteases β- and γ-secretase. The beta-site APP cleaving enzyme, or BACE-1, is a transmembrane aspartic protease that is localized in the golgi and endosomes. Low levels of BACE-1 mRNA are found in most adult tissues with a higher level of expression in pancreas. 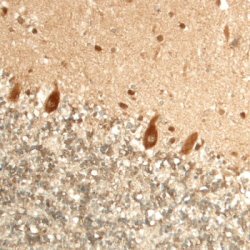 Image: Detection of BACE-1 in human cerebellum. Stained with HRP-DAP (brown) and counter-stained with hemtoxylin (blue). 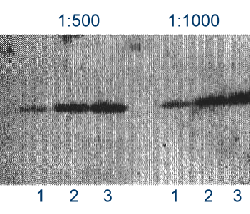